THINGS I'VE LEARNED ABOUT PAPER PIECING AND THE GIFT

I have been working for a couple weeks now on my Confetti quilt.  The blocks are paper pieced.  I had done a little paper piecing, but never this much.  I have had an interesting learning curve on this project and thought to share a bit of it.  While paper piecing isn't rocket science these few little tips have made things so much easier. 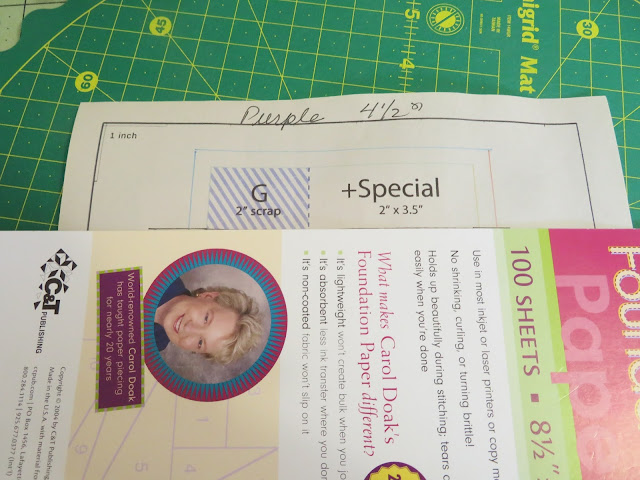 In the beginning when I folded over the paper to trim my seams to a quarter inch I found that it was difficult to stay on the line.  I remembered a tip given in one of my on line classes to use a post card that is just a bit thicker than normal paper.  Folds were very accurate to do perfect trimming of the seams. 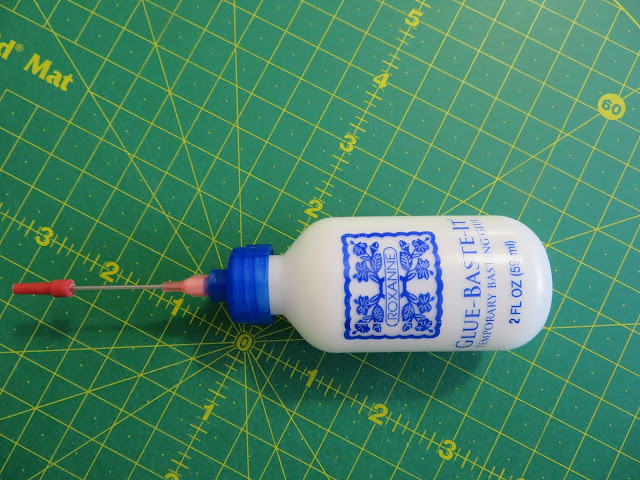 In the beginning I was using glue sticks.  Unfortunately I found they are used up fast and they were costly.  I have had this Roxanne Glue in my stash of tools for ages, but never used it.  I decided it might be time to give it a try. 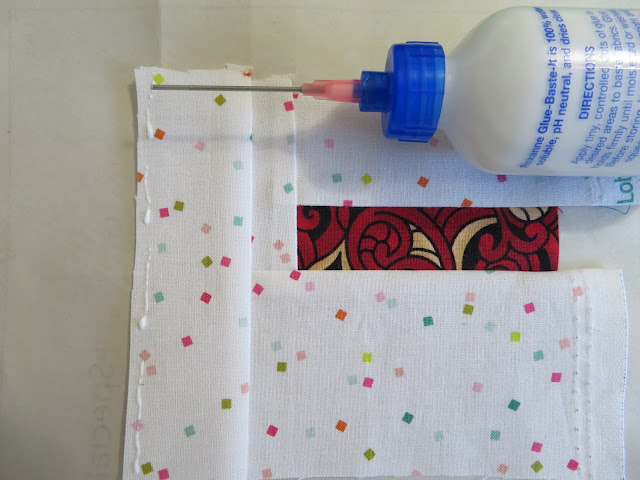 This was just the greatest thing ever invented.  You can apply it within the seam allowance so no excess smears of glue. 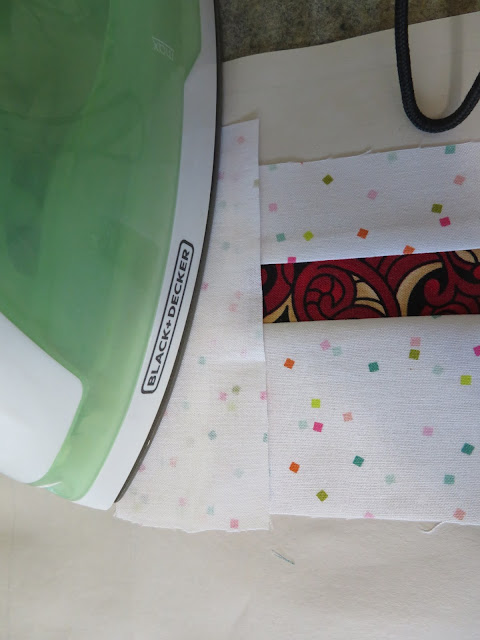 I also found that just a bit of a press before going to the sewing machine dries the glue so no slipping or sliding on the area. 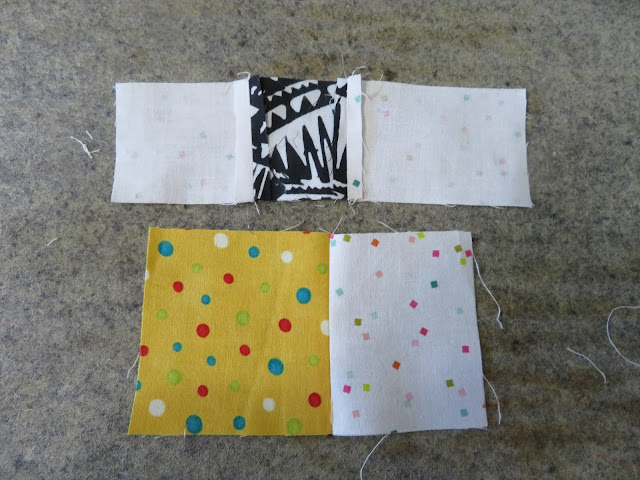 This particular pattern has some pieces joined before paper piecing them.  A bit of a different system than I every dealt with before. 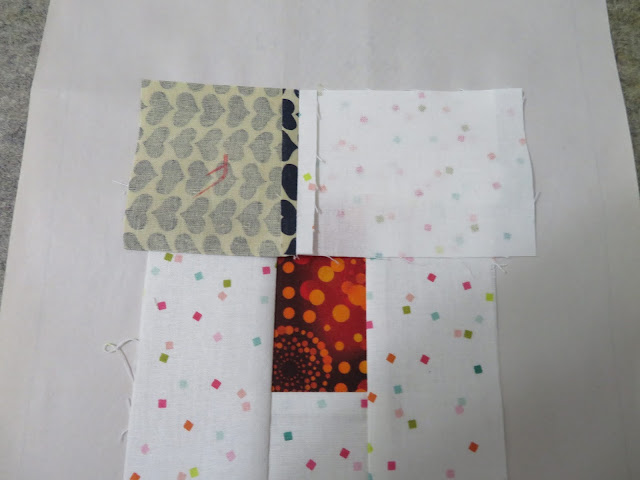 It works really great, and while other patterns might not use this method I thought it certainly could be used in similar situations. 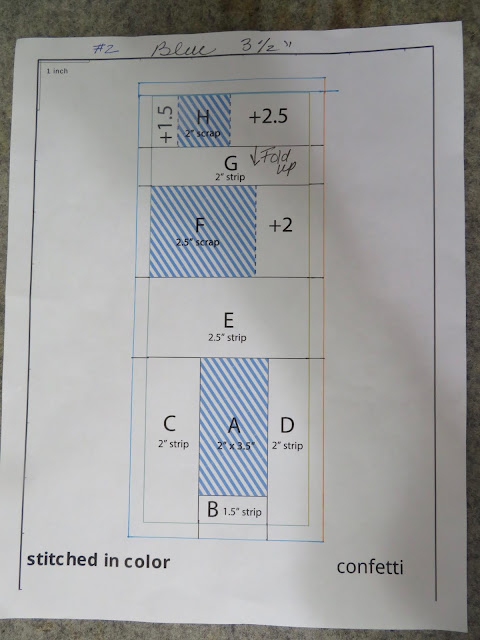 I did find that my patterns did not include the seam allowances.  I decided that the best plan was on the original patterns I would draw them in and also indicate where seams should extend beyond the seam lines.  Plus I even made a note of the one or two seams that should be folded and pressed in a different direction to join the two block parts.  Once all that information was on the original pattern pieces it was easier to not get confused when doing multiple blocks.  There are 64 blocks in the quilt top and each block has two parts.  So, having that information when make 128 block pieces made things easier. 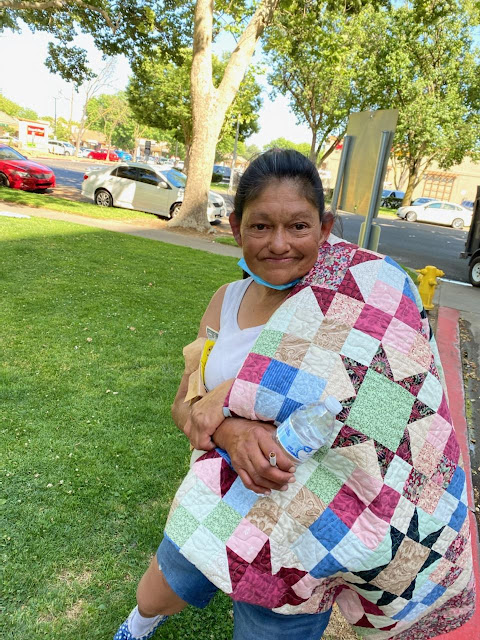 I spent some time doing some heavy duty housework these past few weeks.  We have travel a good deal over the last 4 or 5 years and one of the drawers in our guest bathroom was loaded with various travel size shampoo, lotion, bar soaps, as well as toothpaste, floss, and toothbrushes our dentist gives us at each visit.  I did a major clean out and our daughter took them to a couple that does a good deal of assistance for the homeless in our area.  As I was doing all that clean out I also found several old quilts and blankets in our linen closet that I added to the donation pile for that couple.  I was sent this photo of one of the quilts I donated for their cause.  They told me that they wanted it to go to someone special.  This photo was taken when the woman received  it.  It was nice to pass on to someone happy to get it.  It was one of the very first mystery quilts I ever made.
DESIGN WALL MONDAY
MID WEEK MAKERS
CONFESSIONS OF A FABRIC ADDICT

Posted by DonnaleeQ at 6:47 AM

AUGUST BOM AND A POSEY QUILT

August has just begun and I am back to working on the 8th month of my Block of the Month Garden Party Down Under.  I got my Alex Anderson ne... 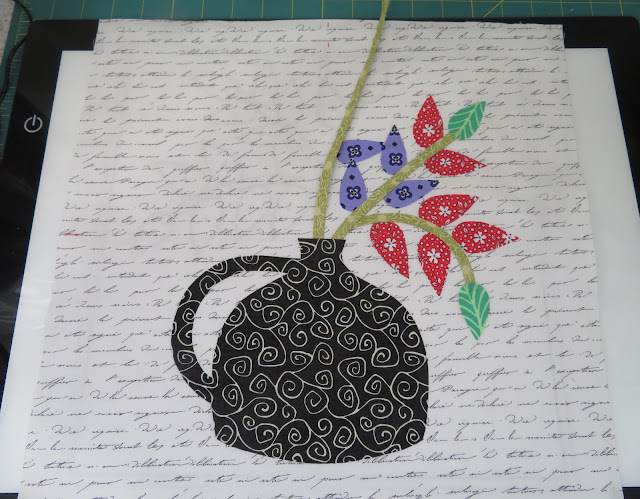 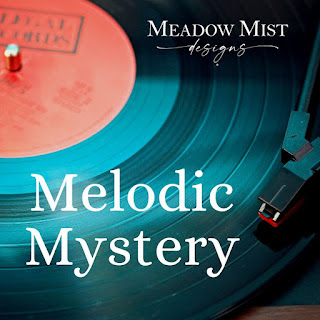