The Garden Party Down Under quilt top is finished.  It has been a long eleven months, but I am pretty happy with myself as I stayed on task each month.  That is not the way I usually work, projects like this one in the past have often taken several years to complete. 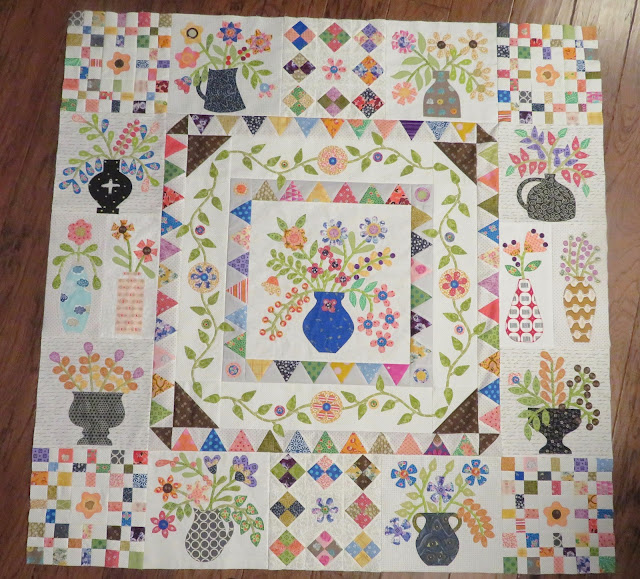 I elected to not put on diamond borders.  It finishes at 63 by 63 inches now.  A perfect fit for my dining room wall above the buffet.  It is off to the quilter on Monday. 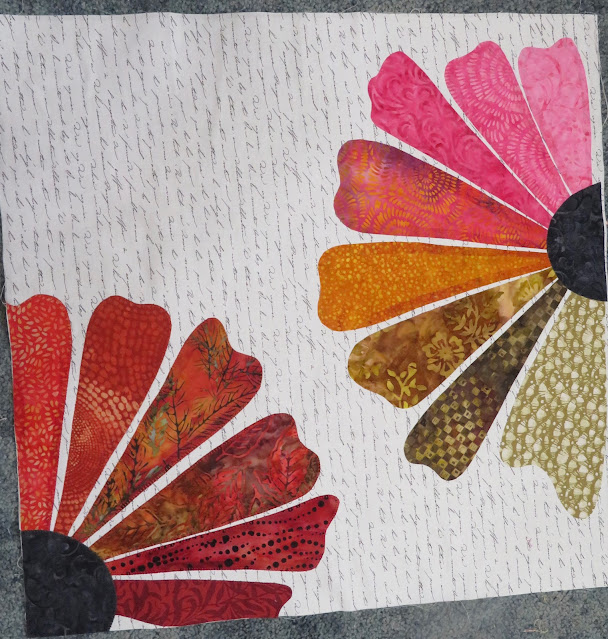 This week I started a new appliqué project by Laura Heine.  I immediately ran into a major issue.  I managed to get the entire lower left pieces appliquéd on fused the left side pieces when I realized I had a problem.

I was using Steam a Seam 2 to fuse my pieces on.  I noticed that the fusing is coming through and leaving a very apparent shadow.

And the two shown here are not all of the ones that were like that.  I discovered that the batiks were the issue.  I had some regular cotton pieces that showed no problems at all, but the batiks were not something I was going to deal with.  I scrapped the the project.  I cut out a couple samples of the batiks and tried Steam a Seam 2 Lite, it worked OK, but I was hesitant to trust it.  So I pulled out some Pellon Wonder Under in both heavy and medium weights.  The heavy weight worked just fine, no issue at all and it fuses well.  Moral of the story, is DO NOT USE STEAM A SEAM 2 FUSIBLE WITH BATIKS.

I spent the end of last week re-cutting, re-fuseing then re-appliquéd the new block pieces and will be taking the problem block to the quilt store where I am teaching a Beginning Quilting class to show the shop owner so she can warn others of this issue.

CONFESSIONS OF A FABRIC ADDICT

Posted by DonnaleeQ at 8:23 AM